Let's Touch Base. Or was that Basis?

If there's one part of life where our instincts can't be trusted, it's language. Whether we're garbling our grammar or fumbling our phrases, there are at least a million ways in which an error in our English can snake the steam out of what we're saying or selling.

In this digital age, one wishing to make a great impression must not only be vigilant when verbalizing but tactful when typing.

In the interest of increasing your effectiveness, here's some info on an interesting idiom you might be misusing...

First of all, I should make it clear that in my experience, this common idom is almost always used in the correct context. The problem is that it seems to be misunderstood and misspelled almost as frequently as it is used.

This is the easy part. Most folks will quickly agree that "Let's touch base" means roughly, "Let's get together to review or gauge our current status".

EXAMPLE: A salesperson might say to a prospect, "Let's touch base tomorrow regarding your decision." In other words: "Let's get together tomorrow to review or gauge the status of your decision."

In the span of the past week alone, I've seen this phrase written alternately as:
...and even, for reasons I may be better off not knowing... 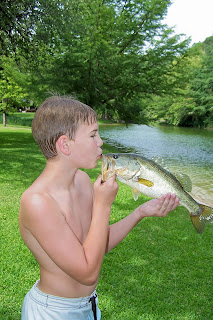 Basses do not like to be touched unless you kiss them first.

So, in order to agree on a correct spelling we need to know the origin of the phrase.

The problem is that with such a variety of misspellings, there are an equal number of misunderstandings about why this phrase means what it means.

The bad news is, no one can say for certain exactly where this phrase came from.

The good news is, there are at least three or four reasonable theories, two of which involve baseball...

In baseball, the players must touch each base in order to score a run at homeplate. Therefore, to "touch base" is to quickly "check in" at that base before you can proceed. So, "Let's Touch Base" under this theory would refer to a quick check in before proceeding toward a goal.

In baseball, "after a foul ball, the runner must return to (and touch) the base, to begin the rhythm of the game over again. It's a return to the status quo...a momentary rebalancing and reconsideration. Same tactics? A new play?" (Quote source). This explanation enriches the meaning of "Let's Touch Base" by incorporating everything from Theory #1 and further expanding the meaning of the idiom to include "resetting the rhythm" and reconsidering how to proceed.

The primary NON-baseball theory is that it may have derived from military use. Rogue units in countless video games notwithstanding, I am told by reliable sources that real-life military units on actual missions must periodically check in with their base to let them know how things are going. Given the similarity of this meaning to today's common usage ("let's communicate with our team to discuss the mission status"), it's easy to see how the military may have coined the phrase, "Let's Touch Base". It's also worth noting that in baseball, players more often refer to "THE base" or "A base", whereas the military may more often use the word "base" without a qualifier, as in "let's get back to base", or "Sgt. Jones is living on base". This seems to lend credence to the theory that our idiom may have a military origin.

Some experts believe that the phrase may refer to playing a bass guitar. This idea has two parts: First, is the fact that the bass guitar brings much needed richness and harmonic foundation to the music of the ever-popular 3-man rock band arrangement; Second, is the fact that bass players with their "I'm just too cool for other instruments" appeal and their brooding, "I could snap an any moment" sensibilities are arguably some of the coolest musicians alive. A far cry from the minstrels of history, bass players tend to look like they're only playing music right now because they got bored wrestling Kodiak bears and mind-tricking ninjas. Hence, with this deadly combination of rhythmic note progression and ultimate coolness, "Let's touch bass" could actually mean something like "Let's work on the foundational harmonics of this project in a brain-frying-ly awesome way that makes people scream and pass out". 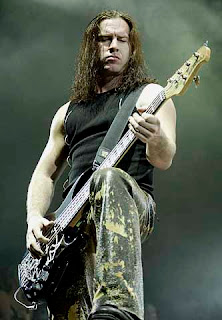 OK, so I admit I completely invented that last one to satiate my inner beast, but each of the other theories makes a very good case for the origin of the phrase. I personally lean toward #2 or #3 but unfortunately we may never know which one is correct.

However, we CAN say with relative certainty that the phrase has its origins in either baseball or the military, which tells us one important thing...

THE CORRECT SPELLING IS:

And now you know, so please proceed to email your clients confidently about the next big meeting.

Just don't blame me if your boss thinks you have a weird fish problem.
Posted by CRB at 5:50 PM